With our vision of keeping brokers and agents connected to their customers forever, we’re dedicated to providing the most innovative real estate technology. We believe lifelong connections and strong relationships are foundations of the real estate industry and all of us at SkySlope are driven to support our customers in that mission.

Our latest updates to the SkySlope platform showcase customer feedback combined with forward-thinking technology to help you work more efficiently — spending less time on the paperwork so you can spend more time connecting with your partners and clients.

Gotta have more cowbell EMAIL!
We heard your requests and we’ve spent the last several months updating listing and transaction email notifications with an entirely new look and feel. Not only will notification emails look awesome, but they’ll provide useful information and deep links to take you directly to your files. Read more about our redesigned notification emails and learn how to customize your notification settings.

Here’s a few examples of our newly redesigned email notifications:

Closing transactions is now globally available for auditors and brokers. You can now close a file as soon as you are finished reviewing the file, regardless of what tab you’re on by clicking the Transaction Actions drop-down. 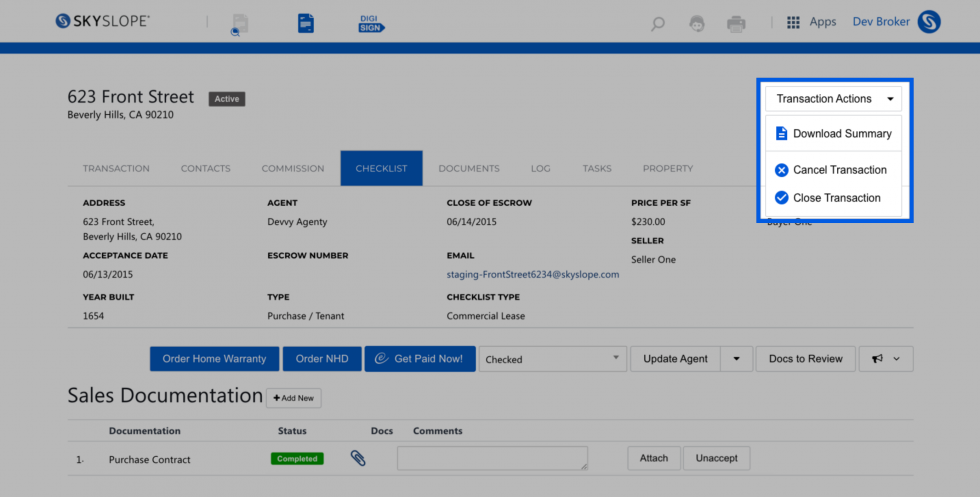 SkySlope Forms is now available in Texas and Colorado

Next up, we’ll be bringing SkySlope Forms to our friends in the Pacific Northwest!

We’re excited to begin releasing SkySlope Forms to Washington and Oregon throughout November and December.

With SkySlope Forms, transactions become faster, more flexible, and are now fully integrated with SkySlope’s best-in-class digital transaction management software and DigiSign, our exceptional digital signature. SkySlope Forms delivers a seamless experience for everyone involved in a transaction, from contract to close. Learn more and get notified when Forms will be available for your state.

• Editable templates
• Clickable PDF links
• Improved field linking across forms
• An optimized authorization workflow so you can get SkySlope Forms up and running fast!

Read more about the most recent updates to SkySlope Forms here.

The following DigiSign updates are available to accounts who have SkySlope Forms enabled.

Custom signature or draw your own

When you launch an envelope sent from DigiSign in SkySlope Forms, you will be prompted to either choose a font or draw your signature.

To get updates on all SkySlope Releases, subscribe to our monthly updates on our
Release Notes Page

Highlights From The Blog

3 Tips to Get 100% Adoption on Broker Provided Technology

There is an entire process behind the research, vetting, and selection of brokerage technology. Oftentimes, you spend months researching and comparing various platforms — and you’ve been told it will optimize the way your brokerage does business.

But how can you be certain your team will incorporate the technology you’ve invested in and not simply fall back to the traditional approach they’re familiar with? Read more.

Do More With SkySlope

If you have documents in your property file that you need to share with others, using Document Bundles is a sure-fire way to get that done. A Document Bundle is a group of documents that can be accessed by anyone via a web link. All you need to do is select the documents, generate a link, and share the link via email! Learn all the ins and outs here.

Need to brush up on the SkySlope basics? Fear not! Every week, our Customer Success Team provides several brief training sessions that review the basic functions and processes of SkySlope with live Q&A at the end! Check out our daily webinars here.

Our Customer Success team hosts weekly webinars to help you brush up on your SkySlope skills. Each webinar is about 15 minutes and explores a helpful new topic like, “Managing your checklists” Sign up for an upcoming class or watch a recording from our archive.

Follow along with our Release notes page to get all our latest product update news and enhancement details as soon as they are released.

Have a suggestion for how to improve SkySlope? We want to hear from you. Add your feature suggestions here.

California agents using SkySlope will now have full access to...

A Quick Win for the New Year

There is one super easy thing you can do...

With our vision of keeping brokers and agents connected to...

Get the latest news and updates delivered directly to your inbox.